Learn how to choose the best hardware and what the best practices are to improve your UniFi deployment.

When deploying a new wireless system using UniFi, there are a few best practices to consider to ensure everything goes smoothly without any hiccups and that users have the best experience possible. There are things like frequency allocation, power output, access point placement and more to consider.

This guide covers some common things to bear in mind when setting up a new UniFi wireless network or tinkering with an existing set up to make it work more smoothly. There will be some information about picking the correct hardware too as this can make a huge difference.

Overview of the product line

This section is best suited for people looking for an overview of tips and best practices for a brand new UniFi deployment.

The last section below titled 'Improving your deployment' is best suited for people who already have UniFi installed but are looking to fix or optimise their existing network. 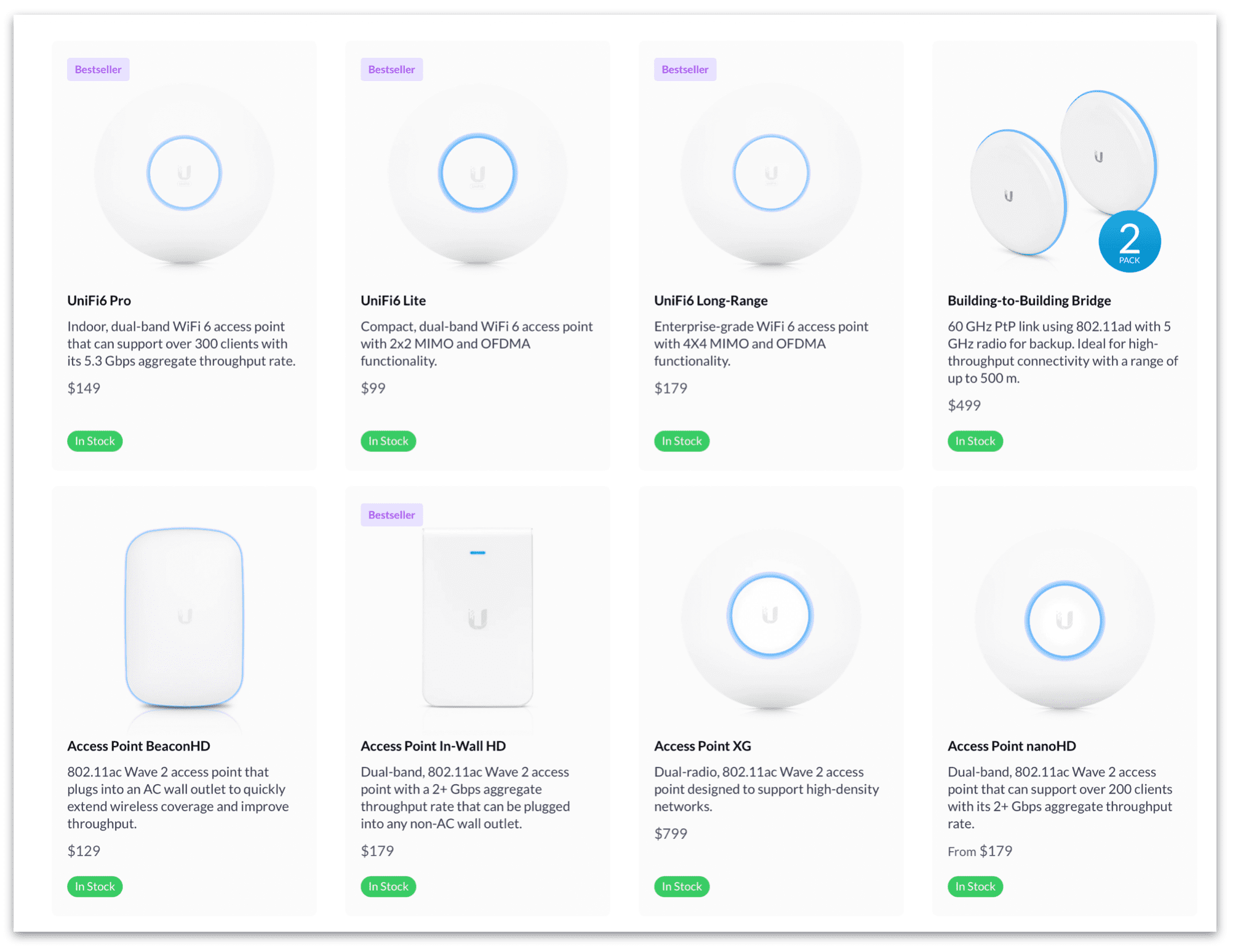 Ubiquiti's UniFi wireless product line is pretty large, with multiple generations of access points for different use cases and versions of the WiFi standard. Some access points are outdoor rated, some are best used in hospitality and some are called 'Mesh' but can be used just fine as regular wired access points.

Lately, the UniFi wireless product family has expanded into PtP devices, called 'Building-to-Building Bridges' and these are used for connecting up to spaces with a very high capacity 60GHz wireless link but managed using the UniFi dashboard. There are also two UniFi LTE devices, used for very easy setup for a 4G LTE failover network.

Currently, Ubiquiti is going through a bit of a transition. The company is developing its product line for the latest 802.11ax (WiFi 6) standard. The older AC gear is still on sale, usually more accessible and in stock than the newer devices.

Generally, for existing deployments you won't see much improvement in upgrading all of your access points from AC to AX as the whole benefit behind WiFi 6 is improving the performance for dense environments, where there is a lot of devices.

For example, the current top of the range UniFi6 device, the U6-Enterprise can handle 600+ clients, supports WiFi 6E which means 2.4GHz, 5GHz and 6GHz clients can connect and has a 2.5GbE Ethernet port to support much more traffic than before.

However, if you are after more of a tried and tested model, the existing nanoHD and AC Pro access points offer good performance at a more affordable price. However, we would still maintain that if you are starting out with a new network from scratch, then going all in on UniFi6 is still the best choice.

Overview of the product line

In the UniFi product line there are a few categories of devices, we have:

The traditional UniFi AP is something like the AC Pro with its round saucer design, it is best suited in a ceiling facing down or on a wall facing towards clients. Newer models tend to have metal on the rear to help mitigate any interference coming in.

With the latest UniFi6 devices, Ubiquiti now has a full product line with the U6-Lite, U6-LR, U6-Pro and U6-Enterprise. All of these devices fit a purpose and are priced from $99 up to $299.

The entry level U6-Lite can handle both 2.4GHz and 5GHz at 2x2 MIMO and has the same form factor as the older nanoHD. Ubiquiti say it can handle 300+ clients. The range topper U6-Enterprise can handle 600+ clients and supports WiFi 6E, this would only be used for really dense deployments.

With both the AC and UniFi6 devices, Ubiquiti has a good range of outdoor rated access points with the AC Mesh, AC Mesh Pro and FlexHD as well as the XG Basestation and the much newer UniFi6 Mesh.

Confusingly, Ubiquiti has a few devices with the Mesh branding but any UniFi AP can be used in a mesh capacity so long as it is set up in the controller. Generally, however if it has Mesh in the product name it can be used outdoors wired or wirelessly.

The AC Mesh is probably one of the most versatile outdoor APs on offer. It comes with included external antennas which can be swapped out to allow you to use the AP with any airMAX antenna, omnidirectional or directional. Ubiquiti also make a dual-band antenna, the UMA-D which can be used to point in a specific direction.

The U6-Mesh is one of the newest outdoor access points, supporting WiFi6 and 4x4 MIMO and it can be mounted pretty much anywhere. Due to it having the same form factor as the FlexHD it can be mounted on a pole, wall, in a dropped ceiling or just placed on a desk.

Ubiquiti has some in-wall access points with less gain than the other models. They are best used in hotel deployments as you need one AP in each room, but don't want devices from the neighbouring rooms connecting to the wrong APs. There are a few models on offer with the AC-In Wall, In-Wall HD and the newest UniFi6 In-Wall.

The UniFi6 model comes with a four port switch on the bottom too, with one PoE passthrough port which can be used for something like a VoIP phone. The other ports could connect to a television or games console.

The last category is the extender APs. Ubiquiti has the BeaconHD which is from the older AC lineup and the newest UniFI6 Extender. Both are designed to be used in the home or small business environment and will automatically connect up to an existing wired UniFi AP to extend the coverage.

There are a few caveats however, there are only two models. One for the US market and one for the EU market, the UK is left out unless you use an adaptor. The device also covers a dual socket, which could be problem if you don't want to lose access to one socket.

For the home environment, to extend the WiFi coverage to a corner of the house where it would be not worth the effort to run a dedicated ethernet cable then they could be a good choice.

WiFi uses three different frequencies, 2.4GHz, 5GHz and 6GHz. Each frequency has its pros and cons and we'll explore that here.

2.4GHz has been used for WiFi for a very long time. For a while, it was the most popular way to connect devices, thanks to its low frequency and superior range. However, as our need for more bandwidth and real time voice and video applications have increased, everything is switching towards 5GHz.

Higher frequencies offer increased bandwidth and throughput and 2.4GHz has become the way to connect up smaller IoT devices in the home like lightbulbs, door locks, sensors and more.

2.4GHz also is used in a lot of places, not just WiFi. This can have some effects on interference. 2.4GHz is used for baby monitors, Bluetooth and Microwaves when running emit a huge amount of interference on 2.4GHz.

5GHz is now one of the most popular frequencies to use for WiFi connections. It provides a good balance of range and performance when used in the right way. Unlike 2.4GHz, there is a large amount of spectrum available which is useful for dense deployments.

In 2022, pretty much every new laptop, smartphone and even smart watches now support 5GHz so there is less reason to keep 2.4GHz enabled for your main SSID.

Using 6GHz for WiFi is pretty new. As of writing (August 2022) there aren't many client devices using 6GHz yet and only one UniFi AP that supports it. As it is only 1GHz higher than 5GHz, it is likely to have the same wireless characteristics with slightly less ability to penetrate walls and objects.

Like 5GHz there is an abundance of spectrum available, but how devices perform when there is 5GHz and 6GHz available remains to be seen.

There are many ways you can improve your existing UniFi deployment, from looking at where the access points are located in the building, how near they are to each other, what frequencies they are using, channel width, TX power and much more.

In the last section to this post, we are going to explore the ways you can make an improvement to your UniFi installation.

One of the first things to have look at is what frequencies / channels you have set on each access point. By default, UniFi APs come with 'Auto' on everything but in our testing this never seems to work the way it is intended.

Even if you only have one access point, plan what frequencies are around you using a third party WiFi scanner on Android or the AirPort Utility app on iOS to work out what neighbouring access points are transmitting on.

You can also use the integrated scan tool built into each UAP. Bear in mind, running the scan will effectively turn the AP off for 5-10 minutes while it scans its local environment. 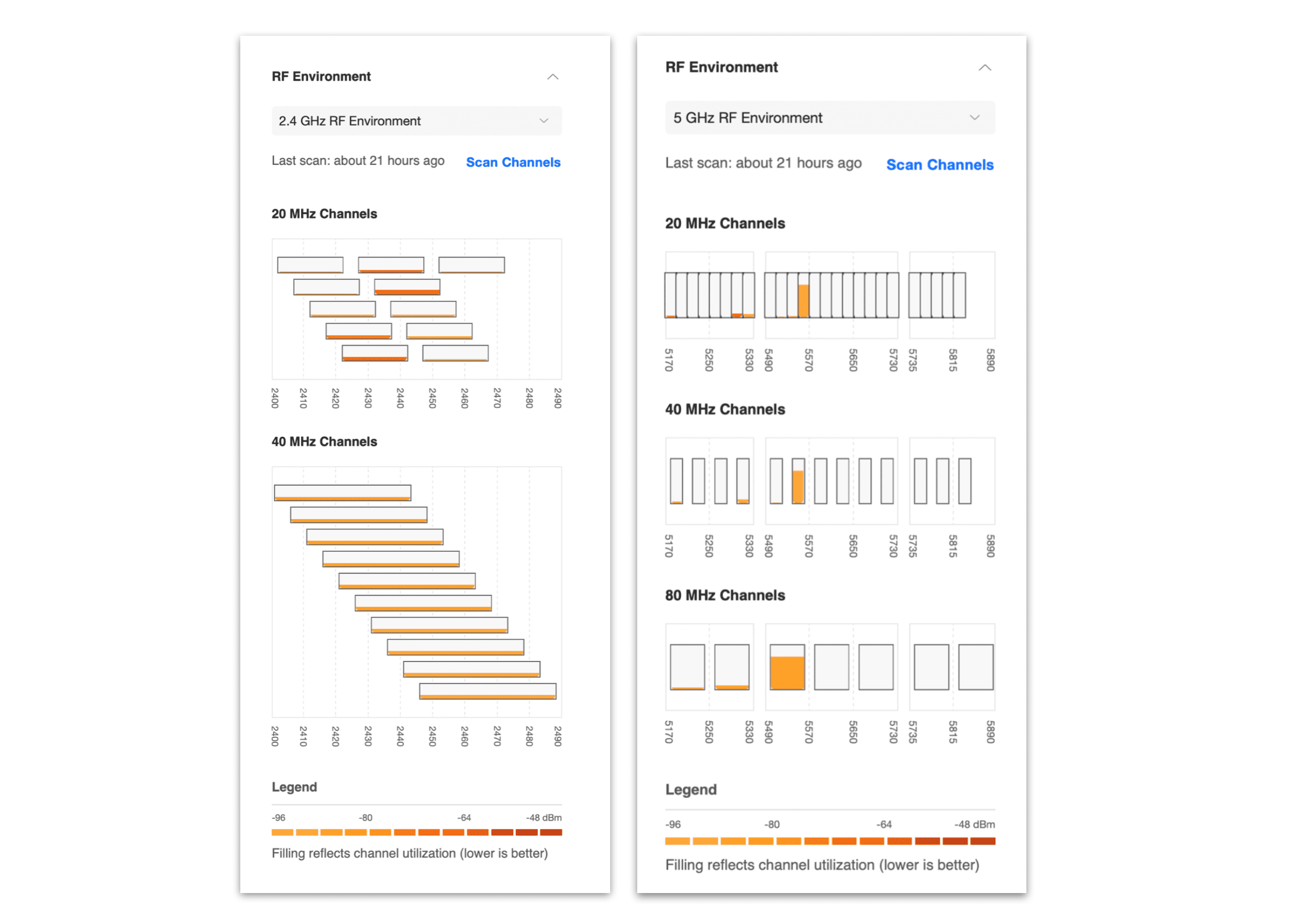 In both tabs, you can see which channels are currently congested and if you need to choose a different one for that access point. Doing the initial scan will scan both 2.4GHz and 5GHz.

Both WiFi frequencies support different channel widths. 2.4GHz can be set to either HT20 or HT40 (20MHz or 40MHz). Due to its limited available spectrum, we recommend using 2.4GHz on 20MHz only and utilising 5GHz for higher bandwidth use cases. Nowadays, the only devices that really have to use 2.4GHz tend to be IoT devices etc, which don't have high bandwidth requirements.

5GHz supports 20MHz, 40MHz, 80MHz and 160MHz*. When compared to 2.4GHz, there is much more spectrum available, but we should still only specify only as much as we need.

Generally, for up to 250-400mbps, 40MHz on 5GHz is more than enough and if you need anything more than that, then consider going up to 80MHz.

UniFi allows you specify the transmit power on access points. If you have lots of access points covering a large building then having more APs turned down can on paper, be better than having less with the power turned up. Having TX power turned way up high can generate the 'Near Far Problem'.

For high density deployments, it is better to have more access points with the TX power reduced so you can have the most ideal amount of overlap per AP. Having weaker clients connected can actually cause more issues, as they eat up more airTime.

For mounting access points, it is best to mount them on walls or ceilings. Wall mounted APs are general used where the ceiling in that space is too high, such as an auditorium.

Ceiling mounted APs should be mounted on a dropped ceiling, mounted them inside the the space can cause issues for signal propagation due to any metallic materials such as pipes and air conditioning systems.

Deciding on where in the room to put the AP can depend on a few things. Make sure that the APs are high enough in the room to cover the floor well, but not so high that it won't see them properly.

Make sure that the access point is not installed behind or too close to other electronic devices such as televisions or air conditioning equipment.