Learn how to choose the best hardware and what the best practices are to improve your airMAX deployment.

When deploying a new wireless link using Ubiquiti radios, there are a few best practices to bear in mind to ensure optimal performance. Sometimes the issues can be out of your control, such as the laws of physics or surrounding interference. However, a lot can be controlled by picking the right hardware and setting it up correctly.

This guide covers some common things to consider when deploying a new airMAX link, whether it be 2.4 GHz, 5 GHz, or 60GHz. It also has some information about Point-to-Point (PtP), Point-to-Multi-Point (PtMP), and the characteristics of common wireless frequencies.

Ubiquiti has a large product line, especially for ISP operator wireless radios. It can be overwhelming and hard to work out which devices to use. Ubiquiti has many product lines ranging from airMAX (NanoStations, NanoBeams, PowerBeams, GigaBeams, etc.), airFiber, and LTU. All of these devices have their use case, it just depends on what they are being used for.

These radios can be grouped into two categories - Base stations/access points, and stations/CPE. Access points are used to create a PtP or PtMP network, and they define the SSID, security mechanism, wireless channel width, and frequency. Stations are radios that join the network defined by the AP. Stations are normally considered customer premises equipment (CPE).

Some radios can only be APs, and some can only be stations. Most airMAX radios can be either a station or an AP, but certain hardware is better suited as being an access point, thanks to a wider spread from the antenna, and other factors.

For example, something like the NanoBeam 5AC Gen2 is not well suited to be an access point in a PtMP environment, due to its narrow beam width. For this reason, it is better used as a station in a PtMP network, or a pair of them can be used to form a PtP link.

A PtP network is when two devices are used to form a dedicated wireless link between two locations. PtP networks act like a 'wireless cable' and function as a transparent layer two bridge. The job of the PtP radios is to get data from point A to point B. Additional networking equipment is needed on either side for routing, switching, and Wi-Fi access for clients. 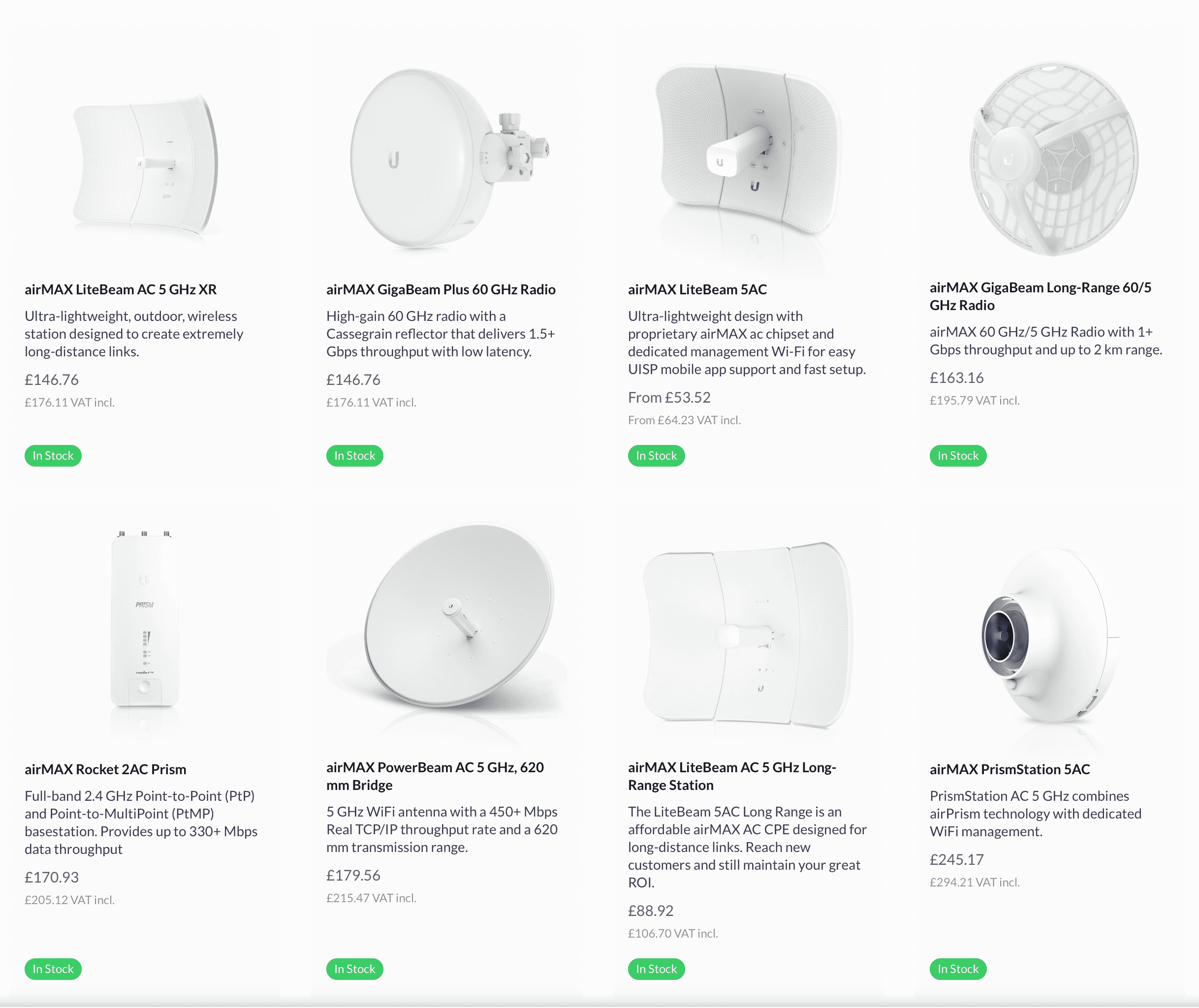 Any airMAX 2.4 GHz or 5 GHz device can be used in this way. The right model depends on many factors, including the distance, required performance, and the availability of clear line of sight (LoS). Usually, higher gain radios and antennas allow for longer links, scaling up the dish size for long distance.

For long range links over several km/miles, usually a 5 GHz radio with a high-gain external antenna can be used. For shorter links, lower powered radios like a NanoStation or NanoBeam can be used. For shorter deployments where a high amount of bandwidth is required, 60 GHz radios like the GigaBeam line can deliver over 1 Gbps of throughput, and they avoid a lot of the common interference issues you'll run into in area with a lot of 5 GHz noise.

A PtMP network involves multiple stations connected to one access point. This has the same basic setup and functionality as a PtP device, but can serve many stations. The more stations that are connected, the less airtime will be available for each, so you usually want to keep the amount of stations as low as possible if high throughput is needed. This varies based on the hardware, channel width, distance, and many other factors, but usually several dozen stations can be connected to a single PtMP access point.

Generally, any airMAX 2.4 GHz or 5 GHz radio can be used as a PtMP access point. However, for better results there are preferred devices to use for access points, such as a Rocket Prism 5AC Prism or Bullet AC with an external antenna. For networks with lower requirements, something like the Lite AP GPS or Lite AP 120 can be considered.

After you have selected your AP, you can pick from a wide variety of models for the stations. Short distance links can work well with the basic NanoStation 5AC Loco, while further links would work better with a NanoBeam or PowerBeam, which offer higher antenna gain.

LTU radios are separate, and not compatible with airMAX radios. All airMAX radios use the standard 802.11 protocol, meaning you can connect a NanoStation to a NanoBeam with no issue. LTU radios can only connect to other LTU radios. LTU uses a proprietary replacement for standard 802.11. You can only use the LTU Rocket as your AP, and you can only use one of the several LTU station models to connect to it. Besides the compatibility, LTU functions the same as airMAX. The LTU Rocket creates the network, and the LTU Lite, LTU LR, and other LTU CPE models can connect to it.

For certain deployments, 2.4 GHz can be very effective as it is an unlicensed band worldwide. It is a much lower frequency than 5 GHz which helps it perform well where there is a lot of foliage.

However, due to it sharing the same space as microwaves, cordless phones, wireless routers and more it might not work the best in some areas. There are also only three non-overlapping 20 MHz channels, and the use of 40 MHz is not recommend.

5 GHz can also be very effective. There is much more spectrum available, which makes it easier to use multiple devices in the same space. Like 2.4 GHz, it is also an unlicensed band worldwide. 5 GHz is the most commonly used frequency, and Ubiquiti has more 5 GHz models than any other band.

Due to being a higher frequency than 2.4 GHz, it does have weaker propagation properties and can have difficulty penetrating trees and walls. The higher the frequency, the more clear line of sight (LoS) matters. For optimal performance over longer distances, a completely clear path is highly recommended.

60 GHz can be extremely effective for short PtP connections, with high speeds, little to no interference. Ubiquiti has many new 60 GHz devices on offer now too. 60 GHz can be used for both PtP and PtMP use cases and has a range of up to around 1.5 km.

Due to oxygen absorption, the radiation from one 60 GHz radio link affecting another close by one is very little so this allows for superior frequency re-use. 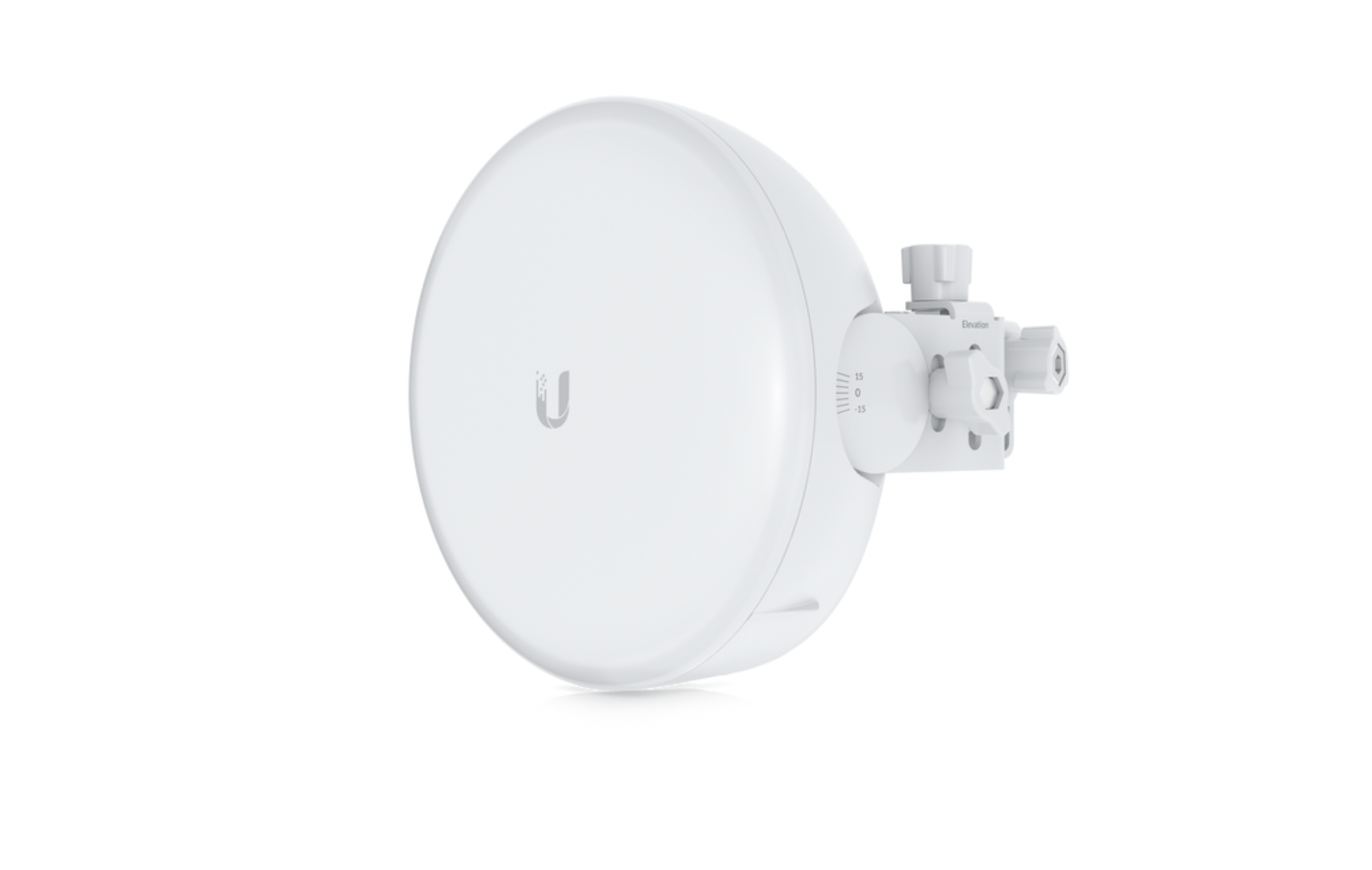 However, all millimeter-wave (60 GHz) radio links are affected by rain fade. In heavy rain, 60 GHz radios usually can't maintain a link over a long distance. This is why some 60 GHz radios have a 5 GHz backup radio to maintain uptime.

When coming across per performance on your wireless deployment, some people tend to push the blame towards the hardware they are using. Occasionally this might be the case, but a lot of the time there are a handful of simple tips to ensure optimal performance is achieved with your Ubiquiti wireless links.

Typically with the dBm power output, less is more. It might seem like that bumping up the power will improve the RSSI and then in turn improve the link performance. However, in practice this can cause negative side affects, not only for you but other wireless users in the vicinity.

Too much power can negatively affect the modulation levels, which means you might have a higher registered RSSI level, but poor performance.

SNR is one of the most important metrics displayed on airOS or any wireless radio system. It is possible to have a wireless connection that has a fantastic RSSI, such as -50 dBm but has a extremely high noise floor of -70 dBm for example. In this instance the SNR would be 15dB, which is the difference between the RSSI and the noise floor.

A good noise floor is around -98 dBm, but can vary on what channel width you are using. In very noisy environments, look at using the Rocket 5AC Prism, with its active noise filtering chip, airPrism.

2.4 GHz airMAX devices have channel width options of 20 MHz and 40 MHz. On the 2.4 GHz spectrum, it is generally not advised to use 40 MHz as it uses up a significant amount of spectrum and the performance gains usually are not worth the interference penalties. 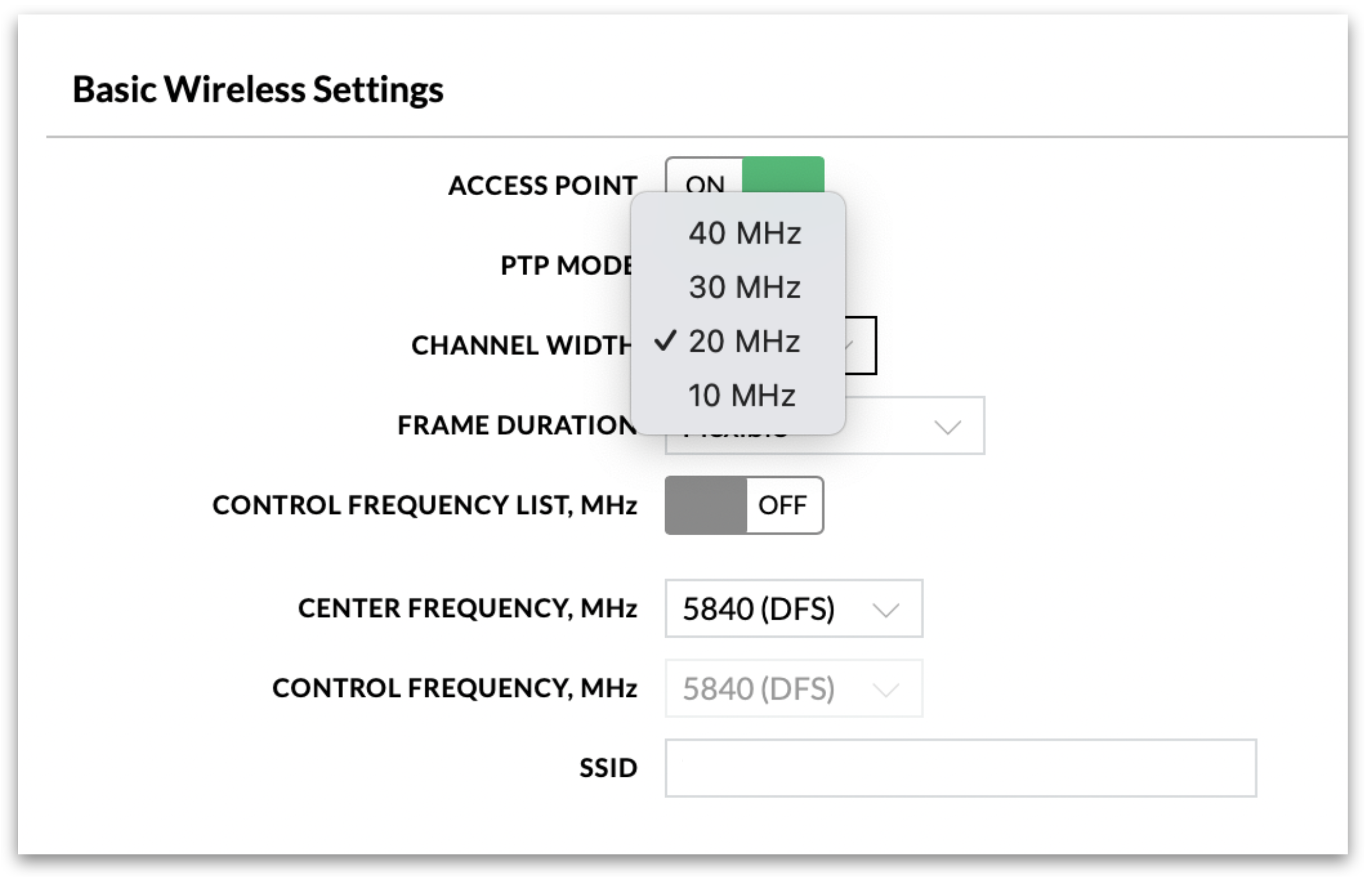 Once you go up to 30 MHz, 40 MHz and 50 MHz you start improve the link capacity, but due to the spectrum used, they are very susceptible to interference. This also goes for 60 MHz and 80 MHz.

For 60 GHz, we can choose from 1080 MHz and 2160 MHz channel widths. For GigaBeams, the 1080 channel is the best choice, as it offers 875 Mbps full duplex, and due to the 1 Gbps interface speed, anything higher wouldn't be worth the extra spectrum used. For higher speeds, Ubiquiti does offer the airFiber 60 HD which offers 2 Gbps+ throughout and more importantly, an SFP+ interface.

Above anything else is getting the dishes aligned with each other, to work out if your wireless link is going to even work we would recommend using Ubiquiti's Link Calculator, which is free to use.

Using this, you can work out if the wireless link is going to work using the map, you can adjust the devices used, frequencies, height and more. Make sure to endure that the Fresnel Zone is good ground clearance, as this can impede the performance.

When physically mounting the hardware, use the built in brackets to adjust the vertical and horizontal chains. Some Ubiquiti devices, such as the NanoStation 5AC and Loco don't have the ability for adjustment, but other devices do. 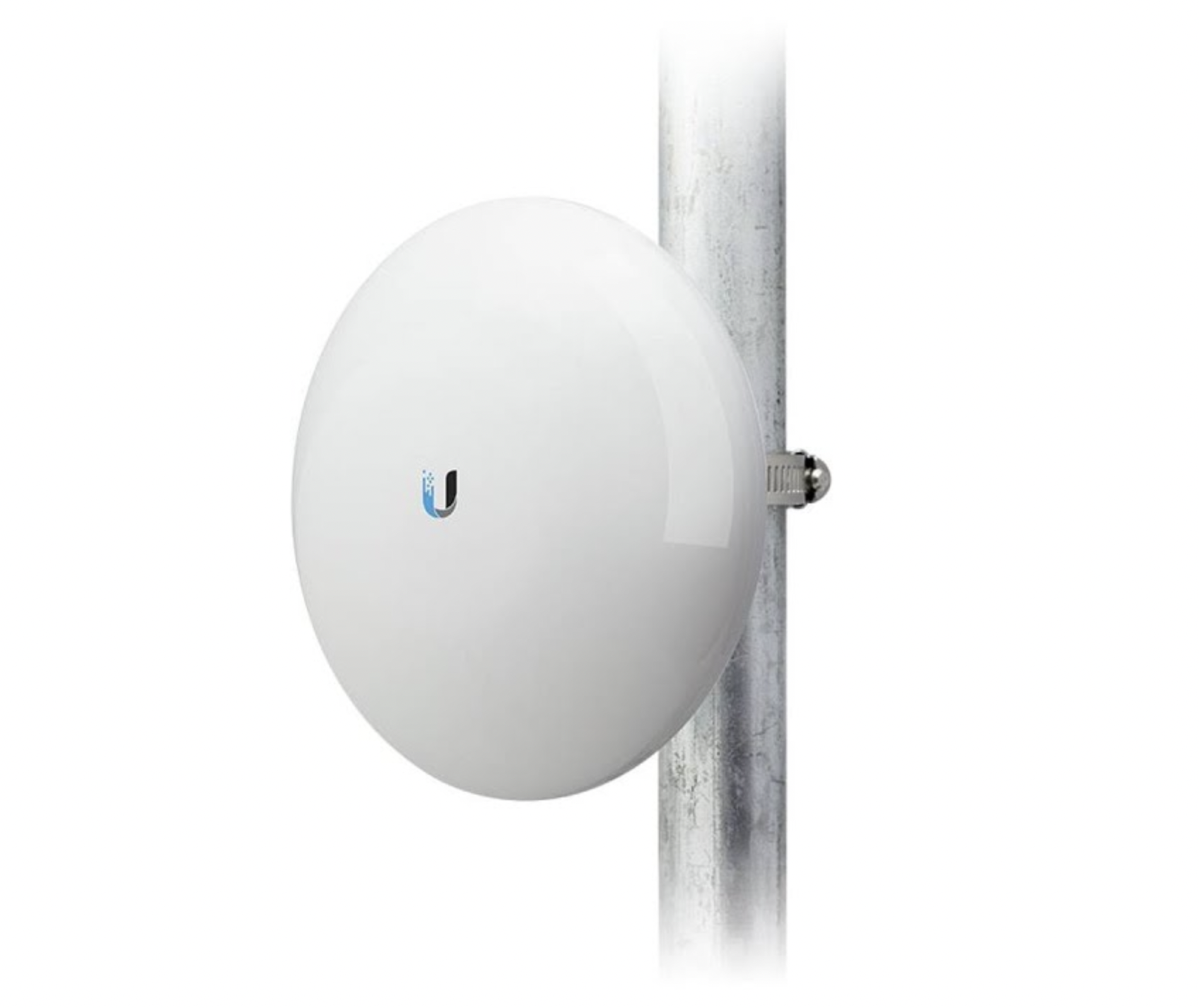 Aim for a good signal, anything over -70 dBm is considered not good and anything under -30 dBm can be too strong for the dishes. Try lowering the power to overcome this, and staying within those boundaries.

As mentioned in the SNR section, choosing an ideal channel width can make a huge amount of difference, but just as imperative is the frequency selection. airOS has integrated tools for scanning the spectrum, with airView and airMagic. 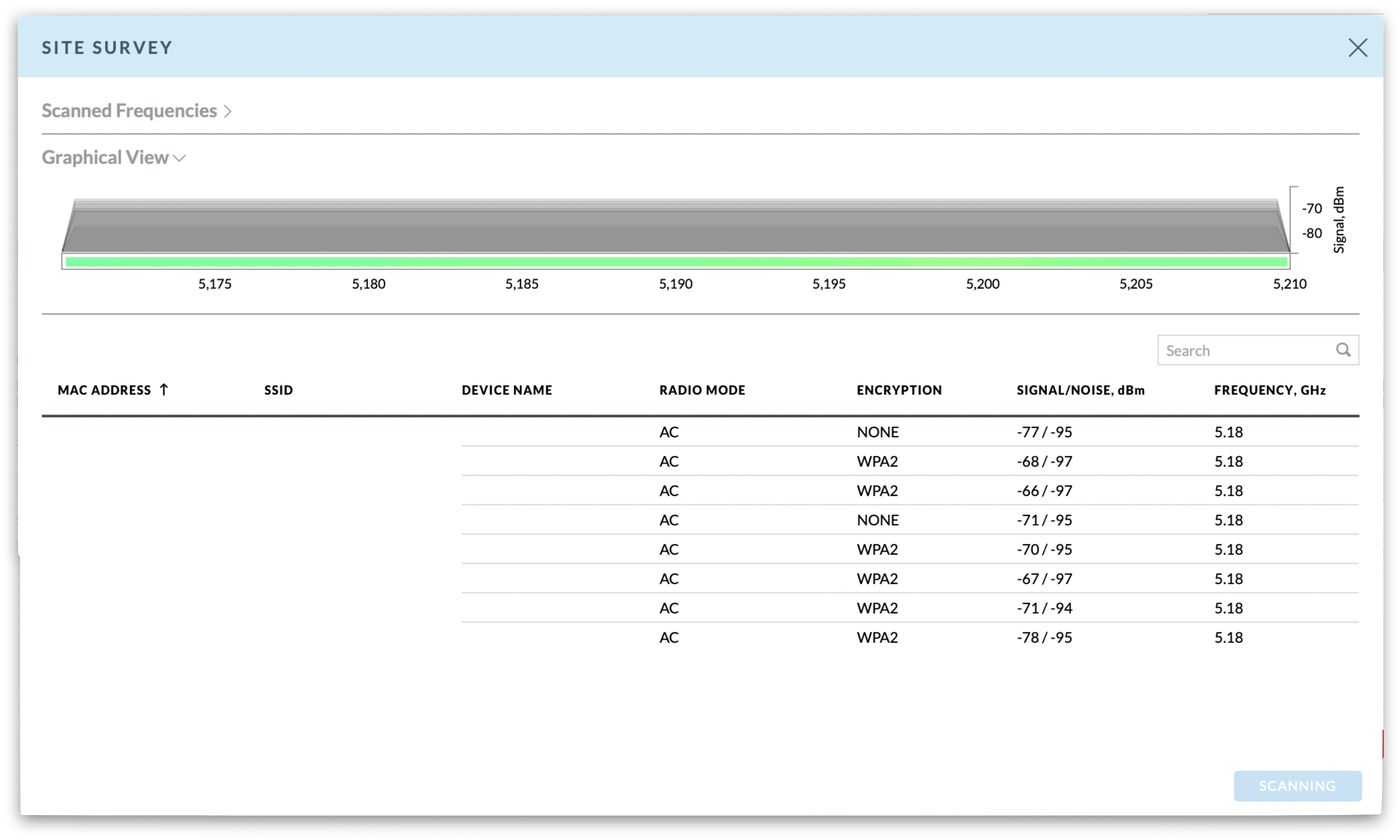 Also, use the built in scanner to look at what other Wi-Fi devices are using the spectrum in the area picked up by the device.

When choosing a frequency, it is worth noting that the airMAX devices don't use channel numbers like WiFI devices. Instead, they use the raw frequency allocations.